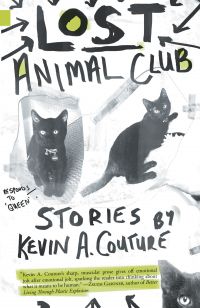 Runner-up in the Prose Fiction category at the 2016 Alcuin Society Awards for Excellence in Book Design in Canada!

In his debut story collection, Kevin A. Couture creates a world where the veneer of humanness stretches thin and often cracks as a menagerie of burdened characters reveal their beast-like traits. In his desperate survival plan, a pre-teen “rescues” dogs in order to sell them back to their well-off owners; a marathon pacesetter reflects on the pace she sets both on and off the race route, as she navigates her imperfect marriage; a man confronts his drive for alcohol and the deadly and isolating consequences that leave him to risk his last scrap of control; and two kids, for different reasons, execute their plan to capture a bear cub.

Lost Animal Club combines murky sensibilities with finely rendered, precise prose. The writing is gripping and honest, with metaphors and similes as startling as the harsh choices the characters make.

About Kevin A. Couture

Kevin A. Couture grew up in a small BC mining town and has spent the last decade waking before dawn to write. The stories in his debut collection, Lost Animal Club, have all appeared in various Canadian and American journals. He has an affinity for mysterious t-shirts and ill-fitting sunglasses, and has created three highly-selective mix tapes each year since 1985. In recent years, he has been nominated for the Writers' Trust of Canada/McClelland & Stewart Journey Prize, and was included in the anthology, Coming Attractions. He lives on Vancouver Island with his wife, two daughters, and their Brittany spaniel, who spectacularly defies animal training.