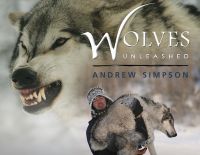 Along with the internationally acclaimed and award-winning documentary film upon which this book is based, Wolves Unleashed takes the reader on an amazing journey that looks closely at Andrew Simpson’s relationship with one of nature’s most elusive, mythical and misunderstood animals.

As a professional animal trainer for the film industry, and having worked for almost every major Hollywood studio on over 100 productions, Andrew deals with numerous species on a regular basis. Thanks to his unique, personal affection for wolves and his worldwide reputation, he was asked to travel to Siberia to make one of the biggest wolf films ever produced, Loup (2009). Travelling from western Canada, Andrew, along with his team of handlers and the wolves he had raised since birth, stayed in a remote camp deep in the Siberian mountains of Russia, enduring harsh conditions in one of the coldest places on earth. Each day brought a new set of challenges, and Simpson was forced to reflect upon the impact that such a production would have on his relationship with his canid family.

At its core, Wolves Unleashed is about Simpson’s deep connection with the wolves he loves. The story reveals his emotional struggles as he wrestles with the decision to use his unique relationship against the animals and jeopardize the years spent building trust. As the pack overcomes their wild instincts in order to perform, it becomes clear that the bond between wolf and man is a testament to their mutual dedication and love.

Andrew Simpson was born and raised in Scotland and travelled around the world several times before settling in Canada and finding his calling as a professional animal trainer for the film industry. His current project is working in China with internationally acclaimed director Jean-Jacques Annaud (The Name of the Rose, Seven Years in Tibet and Enemy at the Gates) on the highly anticipated film adaptation of the Chinese novel Wolf Totem, by Jiang Rong.