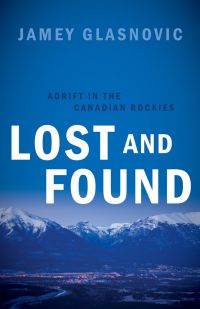 For many people, moving to a mountain town is the realization of a dream, the final step in a pilgrimage to a relaxed lifestyle in a rugged and beautiful setting. After a long journey that began when he was a teenager in the 1980s with the vague idea there might be a better life somewhere “out west,” Jamey Glasnovic eventually fled the chaos and stress of the big city and tried to settle into an uncomplicated Rocky Mountain existence.

Canmore, Alberta, a small community nestled in a picturesque valley situated right at the edge of Banff National Park, should have been the perfect end to his searching. A rapidly growing town emerging on the tourism radar can strain anyone’s definition of paradise, however, and Lost and Found is Glasnovic’s account of his attempt, in the fall of 2008, to recapture the simple wonders of living on the boundaries of a vast wilderness.

A spirited amble by bicycle and on foot, inspired by the work of Bill Bryson, Lost and Found explores the heart of the Rocky Mountain Parks, a UNESCO World Heritage Site known for its staggering beauty, and examines the consequences of celebrating that beauty too effectively with mass tourism and over-ambitious development. Eschewing the convenience of motorized transportation, Glasnovic earns every kilometre that passes beneath his feet, and along the way he learns a thing or two about feeling profoundly connected to place. An experience some would describe as being home.

Jamey Glasnovic was born in Montreal, Quebec, in 1968, and grew up in the suburb of Beaconsfield. A family trip to Spain when Jamey was seven was the first step in creating an avid traveller, and he was drawn early in life to such faraway destinations as Australia, Japan, Mexico and Ireland. He has visited much of North America, from Florida to Alaska, and repeated trips to the mountain west led to a move to Calgary in 1995. After relocating to Canmore in 2004, Glasnovic began freelancing for newspapers such as the Banff Crag & Canyon, Canmore Leader and Rocky Mountain Outlook, and he continued to roam. Hong Kong, Singapore, Thailand, Nepal and Tibet have since been checked off his life list of destinations. Lost and Found: Adrift in the Canadian Rockies is his first book. Stories and photos by the author can be found at www.jglas.com. Jamey lives in Canmore, Alberta.